Musings from the NJ Hall of Fame 2014 Induction Ceremony

On November 13th I had the pleasure of attending for the first time the NJ Hall of Fame induction ceremony. The Class of 2014 was inducted at the Asbury Park Convention Hall, and it was a very fun night out. I was there as a member of the press, and covered both the red carpet arrivals and the show itself. I have to thank NJ Discover for taking me with them, since the organizers don’t accept simply bloggers, just accredited organizations.

The most popular red carpet guests were cast members from the Sopranos. Vince Curatola (Johnny Sacks) arrived first and was very friendly with the media. Then Aida Turturro (Janice Soprano) spent a lot of time really loving the attention and talking to everybody. Vincent Pastore (Salvatore “Big Pussy” Bonpensiero) was also cool and not in a rush to leave his media friends. The FBI Agent Guy slipped unnoticed since nobody knew who he was. Tony Sirico (Paulie Walnuts) was last to arrive and while friendly as well, he seemed to be still in character.

END_OF_DOCUMENT_TOKEN_TO_BE_REPLACED

4,109 of 47,906 registered voters in Middletown Township went to the polls yesterday to vote on a $32.2 million spending measure for repairs to the township’s schools.  The referendum passed 2,951 to 1,158 with 43,797 abstentions.   Mail-in and provisional ballots are not included in these unofficial figures provided by Monmouth County Clerk M. Claire French’s office.

The Middletown Board of Education is now authorized to borrow $19.3  million for school maintenance and repairs.  $12.9 million for the project is expected to come from 20 Regular Operating District (ROD) grants from the New Jersey Department of Education.

In an OpEd posted on Middletown Patch, School Board Member Vinnie Brand made the case for the referendum, arguing that the grants are a rare opportunity which give the board an opportunity to make the “critical need” repairs for 60% of cost while passing 40% off to statewide taxpayers.  Brand noted that interest rates are low and that labor rates are “more reasonable.”

Middletown resident Chris Fotache countered Brand’s argument in an OpEd on MMM submitted yesterday as the polls opened.  Fotache argued that the Board of Ed did not publicize the referendum in order to assure a low voter turnout that would favor the referendum.  He alleged fiscal mismanagement and duplicate spending on repairs and planning fees.

The Middletown Board of Education is attempting to borrow $32 million through a voter referendum on Tuesday March 11, 2014. You have probably not even heard of this because they are doing their best to keep it a secret so that only the school PTA’s and PFA’s (their cheerleaders) are the only ones who come out to vote. They have them brainwashed that this is such a great idea. What many people fail to realize is that the BOE spent $8 million over the last 2 years replacing roofs that needed to be fixed. This was done with extra money left over in the budget. And it was done with only 1% tax increases over the last 3 years. Why now does this new BOE need to pay an architect $1.3 million to do this work all over again? They paid this very same architect over $200K over the last year to do this same exact work. Why are they paying them again???

The answer is they can’t explain it. They refuse to answer any questions. They say vote for it because it’s for the kids. HOW MANY TIMES HAVE WE HEARD THAT BEFORE?

While it’s important to have the schools safe and running in a functional manner, the new Board’s level of mismanagement, misinformation, and incompetence is staggering. These repairs will get done whether the referendum passes or not as it’s the Boards’ obligation to do especially since the repairs are now public.

The board owns 11 properties in town worth millions that they could sell to fund these fixtures. Why are they not selling them and asking the tax payer to fund this. If the referendum fails, they will be forced to sell some and use that money to fix the schools AT NO COST TO THE TAXPAYER.

Don’t forget that not so long ago, a $78 million referendum was passed to upgrade schools. So if they were mismanaged in the past, what guarantee do we have that these $32 mil won’t go to waste?

END_OF_DOCUMENT_TOKEN_TO_BE_REPLACED

Super Bowl XLVIII will take place on February 2nd, 2014, at the Met Life Stadium in East Rutherford, NJ, which is within an hour of most of Monmouth County. “Monmouth and Ocean counties are closer to the Meadowlands than people realize,” said Dave Rible. “Our state’s excellent transportation network and first class hotels and dining facilities offer people a chance to take in a part of New Jersey that will play an important role in next February’s most watched event.  Our rebound from last year’s superstorm is well under way. The beach communities don’t close after Labor Day. The partners we have assembled will make sure visitors are aware of the Shore’s year-round attractions and are worth a visit during their stay leading up to the Super Bowl.”

Tom Arnone, who spearheads initiatives to strengthen Monmouth County’s economy and create jobs stressed the importance of tourism to the local economy: “A vibrant tourism industry is an integral part of our economy in Monmouth County and being involved with the Super Bowl will be a tremendous boost for our local businesses. I look forward to working with local merchants to use this historic event to bring more tourism and more business to Monmouth County.”

By Chris Fotache, Right In Jersey

On Feb 8th, Gov. Chris Christie both vetoed the liquified natural gas project off the coast of New Jersey, and enacted a law to allow wind turbines on Atlantic City piers.

I’m not even gonna go into killing the LNG project, and the savings in heating costs that he refused. But why is he so adamant to get more wind turbines at the Jersey Shore? Residents have recently strongly opposed windmills in Union Beach and in Sea Girt, this last one prompting legislation to restrict building of turbines near residential areas.

It’s very trendy to advocate wind turbines to save the planet, when it’s not in your neighborhood. But what happens when wind mills COME to your backyard? Michele Francese lives in Ocean Gate, NJ, near one of the first New Jersey wind turbines. Here’s what she tells us:

I live directly across from a wind turbine in Ocean Gate. It has completely destroyed the quality of life that we once enjoyed in our quiet little town. Not only is the noise deafening at times, the reflection in our windows makes you feel like you have a disco ball spinning from your ceiling. I’m all for green energy, but more studies must be done before any more are located in residential neighborhoods. Unfortunately, another one is being constructed as we speak in Ocean Gate. I’m very disappointed that what could have been a positive thing has become an albatross around my neck. The concept is great but the result has failed terribly. 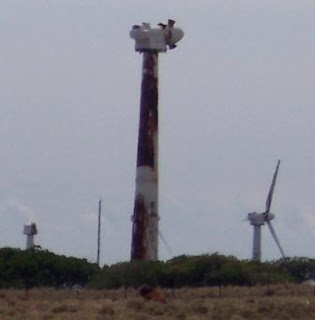 Andrew Walden just wrote a great article for the American Thinker, titled Wind Energy’s Ghost. There, he discusses all the failed wind project throughout the US, including the abandoned farms in Hawaii and California. Most of them have been abandoned. Hundreds of wind turbines lay unused because keeping them up cost more than the energy they produced. Wind turbines have to run all the time to keep the oil running, so if they get wind 20% of the day (which would be a very big number), they actually have to use energy from the power grid the rest of the 80%.

Ben Lieberman, a senior policy analyst focusing on energy and the environment asked the key question:

Walden describes the reality of the wind industry:

So as all evidence points to wind turbines being non efficient and destined for failure, while residents near such windmills complain about lost property value and decreased quality of life, why do politicians keep pushing these bad policies?

QUOTE OF THE DAY

Obama has returned to Indonesia today. Wonder if he’ll find his birth certificate

By Chris Fotache, Cross-posted from Right In Jersey
By now, we’re used to the regular election sign wars in Middletown: signs being stolen, moved or taken down. It usually happens to Republican signs, and an active member of the Democrat executive committee was arrested and subjected to a fine a couple of years ago, after being caught in the act.

But this year, the sleazy Midddletown Democrat thugs are using new tactics. After taking down at least one 4×4 board sign, since last Friday night they started spraying those 4x4s with grafitti. It happened almost every night for the past 4-5 days, and some of those hoodlums are even tagging them with gang signs. You can see this happening on Tindall Rd, East Rd, Leonardville Rd and other places.

Maybe it’s time for Joe Caliendo to remind his thugs that this is not Hudson or Union county, and this kind of gang vandalism is not welcome in Middletown. Or maybe the local committee people would know more. Most of the thuggery occurred in District 23 (Thomas Mahon and Annaliesa Meloro). It was also seen in the neighboring districts, 13 (Steven Borbely and Lynda Cordasco) and 34 (Peter Geronimo and Mary Yule).

Below you can see an example of this new type of Democrat vandalism. 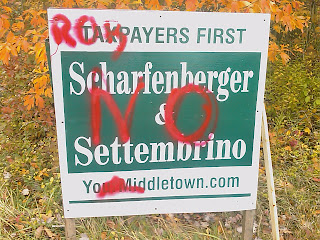 Quote of the day

“I can see November from my house.”  ~ Chris Fotache